As we will see with many entries featured on this blog, sometimes the most remarkable women the world has ever seen fade from memory, while closely connected male figures remain unharmed by the sands of time. This is such a story.

It all begins in the great city of Kish, in central Mesopotamia, over 4300 years ago. The king of Kish, a man named Ur-Zababa, has a prophetic dream which causes him to make a lowly Akkadian gardener his cup bearer, believing him to be blessed by the goddess Inanna. Further visions, however, lead him to fear this strange man, and he tries to have him killed several times. All efforts fail, and the gardener-turned-cup bearer in turn kills the king, taking his place. He gives himself the name Šarru-kīnu, meaning „the True King“. Over the course of the next decades, he will conquer all the cities of Mesopotamia, thereby creating the first empire in history – Akkad. For this feat, will be remembered as Sargon the Great.

It is at this point that the subject of today’s episode appears on the scene. She is born in Akkad, to Sargon and his Sumerian wife Tashlultum, and soon exhibits pride, strength of character and determination – traits her father admires. He realizes quickly that she will prove an invaluable asset in his plans to create an empire.

Mesopotamia, at this point in history, is primarily inhabited by two distinct groups – the Akkadians, a Semitic people, and the Sumerians, a mysterious and ancient group mostly centered around the southern cities. The two groups have entered into a deep cultural exchange, many people in the area speak both languages. Sargon knows that to rule in peace, he has to build a culture that transcends boundaries and unites the cities and their proud inhabitants.

After replacing the local city rulers with members of his own court, he begins focusing on religion. His daughter is sent south, to the magnificent harbor city of Ur. He grants her the title of En – „high priestess“, a tradition that will persist for 500 years. The young woman takes on a new name: En-hedu-anna (High Priestess, Adornment of the Sky-God Anu). This is the name she will use both in official documents and her own poetry, the name that defines her and under which she will do things that nobody has ever done before.

Upon arrival, Enheduanna becomes the high priestess, as well as his ritual „wife“, of Ur’s city god Nanna. He is the Sumerian moon god, a beloved and powerful deity. Her new position gives Enheduanna unprecedented amounts of influence, but she hardly focuses on Ur alone. Over the course of the years and decades she lives at Nanna’s temple complex, Enheduanna composes forty-two hymns, collectively known as the „Temple Hymns“. In them, she describes the cities the great temples stand in, as well as the temples themselves and the gods and goddesses they are dedicated to. Enheduanna is acutely aware of the momentous work she has done – in the dedication at the end of the last hymn, she writes

the person who bound this tablet together

my king something never before created

did not this one give birth to it

Alas, this is only a small aspect of her work as a poet. Indeed, while her hymns were very well-received and continued to be used in Mesopotamia in one form or another for centuries, it is her prayers that have become legendary.

As part of her duties, Enheduanna sought to harmoniously combine the deities of her own Akkadian people and those of the Sumerians she ruled over. The main object of her authorship, at least that which survives, is not her „husband-god“ Nanna, but his daughter, Inanna. 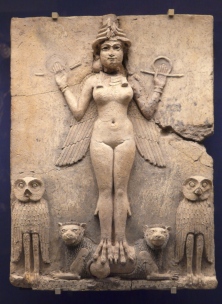 The winged Inanna, surrounded by lionesses and owls

To the Sumerians, Inanna is the beautiful, good-natured goddess of fertility, love, and sexuality. At the same time, she is a being of immense power and influence within the pantheon. The Akkadians’ equivalent is the goddess Ishtar, who also reigns over love and lust, but is much more dangerous – she is a goddess of war and destruction, a proud and terrifying storm and a great champion of justice. In her writings, Enheduanna combines the two goddesses into one: her Inanna is beautiful and awe-inspiring, but hardly a pushover. The priestess funnels her love and appreciation for, and the personal connection she feels with the goddess, into a number of long prayers.

By far the most well-known of these is the „Exaltation of Inanna“, a 153-line poem that was lost until assyriologists Hallo and van Dijk rediscovered in 1968. It led W.W. Hallo to call Enheduanna the „Shakespeare of Sumerian literature“, both in terms of her creative ability and the influence she would have on coming generations of Mesopotamian writers.

In the poem, Enheduanna addresses the Inanna directly, mostly focusing on the goddess’ love for revenge and justice, and the great pain she regularly inflicts on evildoers and even her fellow gods. The reason for this becomes clear by line 81:  “I, En-ḫedu-ana, will recite a prayer to you. To you, holy Inana, I shall give free vent to my tears like sweet beer!”  She then describes the deeds of the rebel leader Lugal-Ane. This man, she claims, has destroyed the temple and driven her into the desert as an exile. For this deed, Enheduanna demands holy retribution, while also admitting that neither her „husband“ Nanna nor great Anu have helped her yet – she looks to the just Inanna instead, hoping for her blessing. The poem ends in third person, describing how Inanna was indeed swayed and helped Enheduanna reclaim her power and titles.

Enheduanna creates something remarkable here – apart from being the first author to name herself in her poetry, she also chooses a very distinct voice for herself: she is not just anybody, she is Enheduanna! Without a doubt, she knows she is the daughter of the King of all the World. She is aware both of her unusual power and ability and the dreadful feeling of powerlessness in the face of uncontrollable circumstances. In her poetry, she struggles with this – realizing that against the might of the gods and of fate, she is powerless, while still knowing that among humanity she is both worthy and great. In Inanna, she finds an ally she can identify with – a „junior queen“ from birth, she made all of creation adore and fear her. This rise from (relatively) humble beginnings resonates with Enheduanna and the story of her father’s ambitions; indeed, there seems to be a deep-seated connection between Inanna and Sargon himself, which likely influenced Enheduanna’s opinion of her. 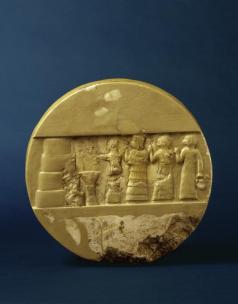 A disk showing Enheduanna (second from the left) in a long dress, wearing the ceremonial cap and inspecting a ritual.

To say that her efforts were successful would sell it cheap indeed – copies of her works, kept with the proclamation of great kings, were continuously made for hundreds of years after her life had already ended. Enheduanna was seen as the model priestess and woman in Mesopotamian society for the better part of 2000 years; her hymns and prayers were recited not just in Ur, but made their way to the young city of Babylon and beyond. If we follow Hallo’s argument, her writings might have inspired Jewish scholars during the Babylonian exile 700 years later, when they started compiling the Old Testament. Certainly, the story of Sargon’s mother leaving him in a basket on the Euphrates, his adoption and miraculous, god-given rise to power was a major inspiration of the story of Moses. Why shouldn’t her well-known and beautiful verses have had a similar effect on the psalms? Similarly, the Homeric hymns of the 7th century BCE bear some interesting similarities to Mesopotamian literature – it is not too far off to suggest that Enheduanna’s influence reached through the centuries and millennia, and can, through the classics of Roman-Greek as well as Judaeo-Christian poetry, still be felt today.

Enheduanna innovated and improved upon several major aspects of theological poetry; she was the first person in recorded history to include her own name in her works, and the first to actively assert herself as an emancipated, powerful woman in a dangerous world. Of the lesser-known characters from history that will feature on this blog, she is one of the most remarkable and influential ones, easily on par with the brilliant Sappho, with whom she shares a female-oriented, strong voice. Not only is she one of the first women whose name we know, but to this day, her achievements continue to be beyond impressive. She continued to be high priestess in Ur until her death sometime between 2250 and 2225 BCE, and might have been revered after her death as a demigoddess. Truly, an awesome woman.